LA Chargers Sing Luther Vandross: "A House Is Not A Home"

The LA Chargers played their first game in Los Angeles with a full house of fans attending. But, alas, the "home-field advantage" was anything but. There was clearly a majority of Dallas Cowboys fans attending, many who live in California.

True, chants of "DEEE-FENSE!" were heard across the stadium, but that was when the Chargers had the ball.
As you know, the Chargers left San Diego 5 years ago after a vote to increase taxes to build a new football stadium failed to reach 50% approval (66% approval was required for that tax increase to pass, actually) and after a subsequent joint-venture with the Oakland Raiders to build a shared stadium in Los Angeles was torpedoed by the NFL in favor of a competing proposal from the wealthier ownership group of the St. Louis Rams.
The Chargers accepted the NFL's offer to share the Rams' soon-to-be-built stadium, rent-free and with no obligation to provide a minimum level of PSL revenue to contribute toward the construction costs, to pack up and leave San Diego.
The Chargers, wanting to establish their own identity in Los Angeles, did decline to share the LA Memorial Coliseum with the Rams as both teams awaited the new stadium's construction to complete. The Chargers tried to find a separate stadium in the LA region, but were rejected by the Rose Bowl. Other less-likely options, such as Dodgers Stadium and Anaheim Angels Stadium, came with their own problems of conflicting with Major League Baseball's scheduling of its regular season and playoffs.
So, the Chargers opted instead to play inside a little 27,000-seat stadium where the city's pro soccer teams plays its games. And for the following 3 years, every Chargers game there was overrun by fans of the visiting teams.
Hey, even teams not known for having fans that travel in big numbers, such as the Miami Dolphins and the Philadelphia Eagles, they also outpaced the attendance of Chargers' fans in that 27,000-seat stadium at up to an 80%-20% ratio. Watching those games on TV, or viewing the official photographs taken by national media photographers, showed just how out-of-place the Chargers were inside their own home stadium.
The then-quarterback of the Chargers, Philip Rivers, even had to go to a silent count in some of his home games because the visiting fans made so much noise trying to entice a "false start" or "delay of game" penalty from his offense.

Well, you say, those are the bad days of old. Now that the Chargers are in the new SoFi Stadium, with all their fans able to attend, the home game experience is gonna be way different for that team. "No doubt about it!", you say?
(well then, cue up the famous soundbite) HOW 'BOUT DEM COWBOYS!!
The Chargers opened up their first home game of the 2021 NFL Season by hosting the Dallas Cowboys. This was also the first time that the Chargers were able to have a full-capacity game in that stadium, as the year 2020 had no attendance allowed in sports stadia across California due to COVID-19 surges and outbreaks. The Chargers played in SoFi Stadium in 2020 with no fans in attendance. But now, in the year 2021, they can have fans! And the fans came!
But sadly, the majority of those fans were cheering for the Dallas Cowboys.
Let's just say that it's pretty demoralizing when you are the Chargers playing at home, you have the ball in your shiny new stadium, and all you can hear is the loud chant of, "DEEE-FENSE! DEEE-FENSE!" everywhere in the stands. Your home debut is effectively a home game for the other team.
I once made a Top Ten List on Twitter back in 2017 of every football team that is more popular in Los Angeles than the Chargers. It was one of my most-retweeted posts, probably because it's premise is basically true.
The Chargers's ownership themselves acknowledge that they will need many years to become a relevant sports option in LA; they are literally doing outreach to middle school children in the hope that once they become adults in 10-15 years, they will be (paying) fans of the Chargers who will, in turn, have their own future children root for them, too.
Yet all the while: many people in San Diego have washed their hands of the Chargers. They did not make the jump with them to LA. They may still consider themselves to be fans of the team, but they did not sign up for PSL's & season tickets, choosing instead to be content to watch that team on TV back in the comfort of their homes in San Diego.
Some Chargers fans did follow the team to LA and bought tickets, certainly. There just aren't enough of them to fill up SoFi Stadium. Nor, it's been proven, to have filled up the little soccer stadium.
Sure, there are years to go in the post-San Diego migration project of the Chargers, and things may yet improve for them. But the first impression of "Chargers-In-LA-In-Our-New-Stadium-In-Front-Of-Our-LA Fans" showed that a lot of work still needs to be done.
Thus my point: their house is surely not their home.
Oh, here was my Top Ten List of Football Teams That Are More Popular In LA Than The Chargers:
1) Raiders
2) Rams
3) USC
4) Cowboys
5) 49ers
6) UCLA
7) Galaxy (futbol)
8) Mater Dei
9) Madden Video Game
10) Mexico National Team
and then fast-forward to...
186) Tudor Electric Football 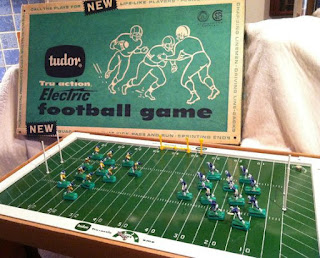 ...and finally you will get to Number 187 on the list: the Chargers
#Chargers #FightForLA #NFL #Cowboys
#RoadTripRallyParty #SoFiStadium #LosAngeles
Posted by Ken at 1:07 PM